The Current Interview / with Sandra Phillips 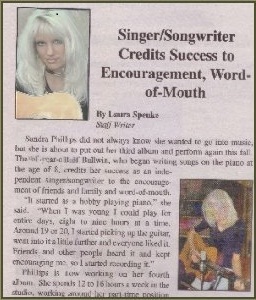 By Laura Spenke – The Current
Excerpts from the article

“Sandra Phillips did not always know she wanted to go into music,  but she is about to put out her third album and perform again this fall….. “

“… she credits her success as an independent singer/songwriter to the encouragement of friends and family and word-of-mouth. ‘When I was young I could play for entire days, eight to nine hours at a time. Around 19 or 20, I started picking up the guitar, went into it a little further and everyone liked it. Friends and other people heard it and kept encouraging me, so I started recording it.’ Phillips is now working on her fourth album. She spends 12 to 16 hours a week in the studio…..”

“…..She also runs an independent, online music magazine, IndieByte.com, owns St. Louis dating service MatchPursuit.com (now Christian-Bistro.com) and is taking classes towards her Spanish certificate. Her music style has been called acoustic urban. She has been compared to Jewel and Sheryl Crow…”

“…on her upcoming, rock-based album, Rob Perry will collaborate with her. ‘It’s a cross of acoustic rock based with jazz, especially with Rob,’ she said. ‘he is so talented – I’m just amazed. He can pick up anything and do any style.’ Phillips says unless she’s collaborating, she always draws from life’s experienced when writing her music. ‘I have to be inspired by something that occurred in my life,’  she said, ‘or something that’s going on around me. It’s an enigmatic experience. During that creative process, I can see the various elements take place and create the final outcome'….”

“…phillips second album, Emotions of Life, came out in 1998. She describes the instrumental collection as ethereal, jazz and mood-based. Her third one, Life’s Journey, came out in 2002 and has more of a pop feel to it. Fare Thee Well is a 2004 three-track single she created to try out the style of her upcoming album on fans…..”

….”She says she began to see a faster growing fanbase when she put her website up just after Emotions Of Life came out. ‘Once I got a website, it started growing into much larger proportions,’ she said. ‘The internet audience is very receptive to independent artists’. In December alone, Phillips had over 600 downloads, and enjoys being hooked up to her fans this way….."

Email newsletters for bands at ReverbNation.com